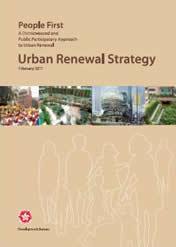 The Urban Renewal Authority (URA) was established under the Urban Renewal Authority Ordinance (URAO) in May 2001 to replace the Land Development Corporation as the statutory body to undertake, encourage, promote and facilitate the regeneration of the older urban areas of Hong Kong.  In June 2002, the Legislative Council's Finance Committee approved that the Government inject HK$10 billion to URA in five tranches over a five-year period from 2002/2003. As one of the initiatives, the URA is supported by the Government through waiver of land premia for redevelopment sites.  According to the URAO, the URA shall exercise due care and diligence in handling its finances.

The Urban Renewal Strategy (URS) is a government strategy to be implemented by the URA and other stakeholders. A revised URS was published on 24 February, 2011 based on a broad consensus reached during an extensive two-year public consultation exercise.  The URA is tasked to adopt "Redevelopment" and "Rehabilitation" as its core businesses under the URS comprising redevelopment, rehabilitation, heritage preservation and revitalisation.